Like most other parts of Yorkshire up to 1750 there were no good roads in Scarborough. This made communication difficult and often dangerous. The roads were uneven and full of ruts. They were narrow and muddy with the passage of people and animals. Prior to 1722 the only road supporting carriages went through Merchants Row and West Sandgate. One of the merchants John Bland agreed to make a paved horse way down the cliff to the sands. This came to be known as ‘Bland’s Cliff’. Soon the streets in the upper part of the town were greatly improved and were flagged on both sides. These included Queen Street and Long Room Street (Later St. Nicholas St.).

From this time onwards a steady growth was to be seen in the kinds of transit and communication. Already from the time of Charles 1, the Stage-Coach was known in Yorkshire, as the topographer, Ralph Thoresby mentioned in his diary that he had journeyed from Hull to York. In 1733 a public coach journeyed from London to the New Globe Inn at Scarborough. Great excitement was shown when on 1st June 1767 The ‘York Courant’ announced a York to Scarborough Stage Coach on steel springs was to begin at the end of the month. By 1790 Inns such as The Blacksmith’s Arms, The George, The Pied Bull (later called The Bull), The Red Lion, The Blue Bell, The Old Globe, The Talbot and the New Inn each let out carriages from their livery stables.

So now Scarborough was to have sounds echoing along its roads from wheels of carriages and the trotting of horses. It became the mode of transport for locals and travellers pursuing their every day lives. From the small town that once nestled under the dominating castle, a network of roads developed. The area eventually expanded to become a busy and significant town.

It was the coaching days that gave Scarborough one of its most colourful periods with its rowdy scenes, horns blowing and whips cracking. It would have provided a spectacle for passers by. These Stage Coaches would provide regular runs to London, York, Hull and Leeds. 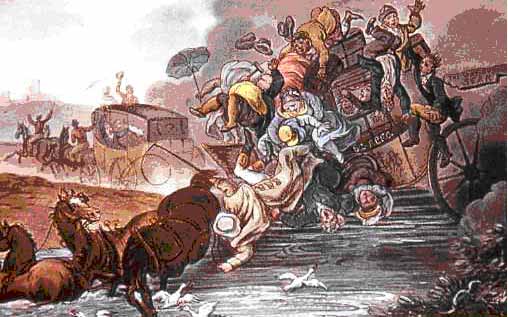 A Trip To Scarborough

During the next century the Scarborough scene took on a new momentum. Inn keepers and other people let out horses. Some of these were for infirm ladies and others were job horses for carriers. One could also hire donkeys and pony carriages by the hour at the bottom of the cliff or Sedan chairs one shilling for 800 yards and eighteen pence for 1400 yards. The mail-coach departed from the Bell Inn at 2:30 pm each Monday, Wednesday, Friday and Saturday and arrived at York at 9 pm. It returned at 8 am the following morning after the mail from the south had arrived. Other coaches connected with Leeds coaches at York. At the Bell Inn the Hull ‘Diligence’ departed on Tuesdays, Thursdays and Saturdays. This would travel through Hunmanby, Bridlington and Beverley. The fare was 16/- to Hull. A number of carriers also went to and from York. One Thomas Burniston and James Craggs from Newbrough-Street set out Mondays and Thursdays at noon and charged 7/- per stone.

In 1803 W. Hutton refers to Merchants Row and Palace Hill. He describes these as streets of horror. The houses were dark and had coloured brick. At the time the town consisted of about thirty streets. Many were steep and prevented carriages from running safely. St. Sepulchre Street was disagreeable and beyond mention. In the area of about ten acres there were about forty passages or thoroughfares. Many were crowded with buildings and he says they were better adapted for the burrow of rabbits than men.

A feature of Scarborough and surrounding areas during the early 1800’s was the Stage Wagon belonging to the Donkin family. In the winter of 1811 there was a snow drift whilst it was on its journey from Hull to Scarborough. It was overtaken by a snow storm at North Burton. Billy Donkin was driving. They arrived at the closings between here and Hunmanby and could not proceed any further due to the storm. Mr.Cross from the “White Swan Inn” Hunmanby was concerned with their non arrival. He saddled up his horse and went to find them. He discovered them caught in the snow drift. It took two days for them to be freed.

It was from the “Beverley Arms Inn”, Newborough Street that the Donkin family engaged their business. On one occasion they were fined 20 guineas for passing the Royal Mail near Beverley and beating it into Hull. Billy would journey round Scarborough each evening with penny pies. He lost his eyesight when twenty-two and was blind for over fifty years. During the first four years he would go round the town whistling. This affected his health and had to resort to using a hand bell. He knew the houses so well that he could remember the voices of the people there. As he went along he was often heard singing his favourite songs “The Farmer’s Boy” and “Lashed to the Helm”.

A significant development took place at Eastborough during the 1860’s. Until this time the Harbour and Sandside was approached from the east of Newborough by Carr Street and Leading Post Street and into Merchants Row. Merchants Row itself was too narrow for much of the traffic. Scarborough Council by 1860 decided that Newborough should be extended eastwards joining West Sandgate with a new wide road.

Other areas surrounding Scarborough were also known to have unusual characters. One of these was old Mrs. Horsley. She lived at Ratten Row, Seamer during the early 1900’s. She was a carrier to and from Falsgreave and Scarborough. She charged 1/2d to Falsgreave and 1d to the market. For 2d she would collect and deliver almost anywhere. She had an old cart and pit pony. The pony walked with its head pointing to the ground. Because they went very slowly they were described as the “Seamer Express”.

During the foregoing years Scarborough enhanced its reputation through its communication with other parts. It had an unrivalled list of famous visitors gracing its shore and streets. Its inhabitants have roused much interest in making the town a pride and joy.