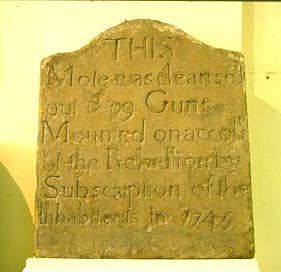 Scarborough had a defensive circuit dating from medieval times. The last time these defences were prepared for war was in 1745 when Scarborough feared the Scottish forces of Bonnie Prince Charlie would attack it.

A committee was appointed ‘to put the town in a posture of defence against the rebels’ and they set workmen to dig out the old Newborough ditch and ringed the town with gun batteries using 99 cannon brought from ships in the harbour. A force of 800 was deployed to man the defences but thankfully their valour was never tested as the Scottish army chose to invade down the west side of the Pennines.

This object is called the ‘mote stone’ as it was found in the ditch near Newborough Bar. It commemorates the deployment of the 99 guns to defend the town during the invasion scare of 1745. Six of these guns were positioned immediately outside Newborough Bar to fire up the street we now know as Westborough.

Scarborough still felt it was vulnerable to a foreign invasion and at intervals thereafter volunteer forces were raised to defend the town. In 1798 the town had five companies of infantry amounting to 400 men and a troop of cavalry. Resplendent in their red uniforms and proudly bearing the town crest on their silk banner, they were never called upon to do anything more dangerous than man the gun batteries at the castle.

You can see this object in the Rotunda Museum.