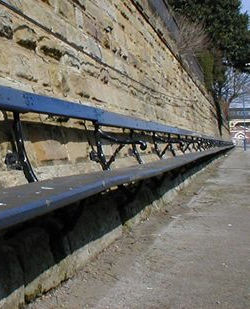 Half way through June 1863 Scarborough reported that the seasonal "rush to the seaside has fairly commenced." Among the excursion trains appearing was one on the Thursday with a large number of pleasure seekers, from the midland counties, under the care of Mr. T. Cook, the well known excursion manager.

The next year Sir Titus Salt, the "alpaca king" brought his employees on a works excursion. One boy, aged nine, ate his raisin pasty before reaching Leeds.

Scarborough Railway Station, the excursion station, the retaining wall, railings and and continuous bench which runs along it, are all listed (National Monument Record UID 447308, UID 447518 and UID 447788.

At 456 feet, this continuous bench at Scarborough Station is reputedly the longest in Europe. It seats 228 passengers. With the coming of the railway to Scarborough in 1845 visitor numbers soured:

On the wall of the former station buffet on platform 3 there is a particularly fine example of a polychrome tile map of the North Eastern Railway network circa 1903. Click here for more details