The production of pottery played an important role in medieval Scarborough. This pottery industry started before the end of the 12th century and ceased in the mid to late 14th century. The medieval pottery kilns were found in 1854 during building works. They were located on Castle Road between the junctions with Auborough Street and Tollergate.

Scarborough Ware pottery is famous as it was exported widely - examples are found over northern Britain, Ireland, Orkney, Norway and the Low Countries. The pots were made of reddish pink, pinkish buff or off-white fabric with a very distinctive copper-green glaze. Some of the products of these kilns were exuberantly decorated. 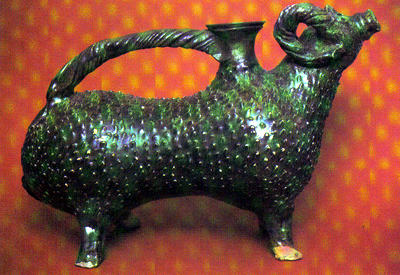 This striking piece of Scarborough Ware is technically known as a zoomorphic aquamanile - an animal shaped water vessel, in this case a ram - the applied pellets of clay represent wool. This horizontal form of water jug is particularly well designed for use on the meal table when hand washing was an essential habit before the fork came into common use for eating purposes in the 17th century.

The ram-shaped jug can be filled through a funnel shaped opening in the shoulders of the animal. The handle with spiral decoration would also be joined at this point. The ram’s mouth forms the spout.

You can see this object in the Rotunda Museum.

Search the Scarborough Archaeological and Historical Society's database of excavations to find out more about Scarborough Ware.