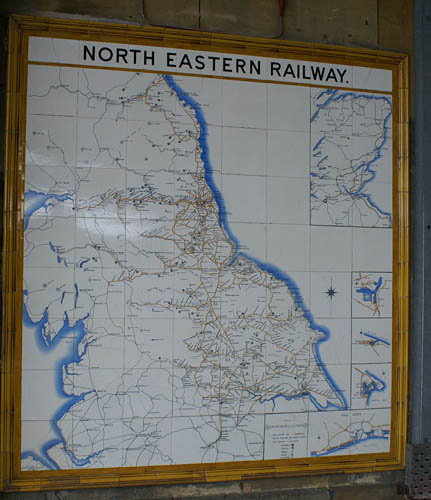 The North Eastern Railway was formed in 1854 by the amalgamation of three railway companies. One of those was the York & North Midland Railway whose branch had arrived in Scarborough in 1845. Based as it was around the major coal, iron, steel, shipbuilding and engineering centres of Tyneside, Wearside and Teesside and around the major railway centres of Darlington and York, the NER was one of the most successful and prosperous railways in Britain.

This polychrome tile map of the NER network dates from about 1903 when the company was at its peak. A number of former NER stations have these maps but this is a particularly fine example – it was restored in 1996.

The map does not show the full network since a few mineral lines are omitted such as the line from Battersby junction to the ironstone mines at Rosedale East and West sides. It does show how, over much of its area, the NER was virtually a monopoly with competition from other companies confined to the periphery. 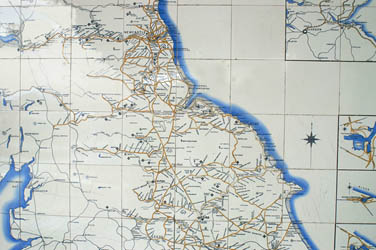 The map was manufactured by Craven, Dunnill & Co – a firm of encaustic and decorative tile manufacturers founded nearly 130 years ago. The company still exists and trades from its original premises now called Jackfield Tile Museum in Ironbridge, Shropshire.

More information on the development of Scarborough station and its railways is in the following books:-